This is a story I did for English class in spring of 2006. I was never completely satisfied with this- I spent so long on the beginning that I sort of rushed it, though I hope to one day fix it to my liking . I hope you enjoy it as much as my English class did! 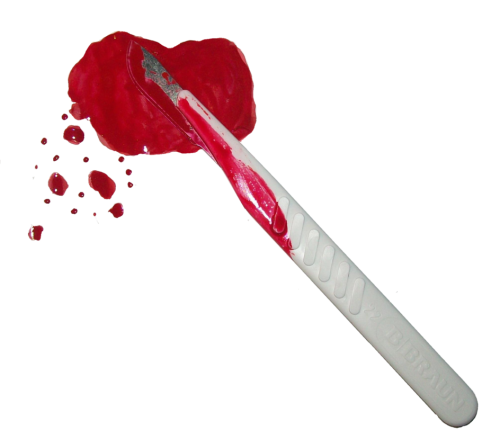 Scalpel was part of a story for a joint English class conducted at Danbury High School under University of Connecticut regulations.  I’m not entirely certain what class the credit was for; it may be on my transcript somewhere.  That assumes that the special circumstances that paid for my examinations also paid for that, that is.

This in particular was a fiction writing project.  Every member of the class created a character, and submitted them to the class.  Then, each character took that cast and wrote a story with it.  Every named character in this story belongs to another author.  Unfortunately, I didn’t keep track of that information.  There will be a form below if you want to claim one of the characters.  Of course, I had to write a slasher story.  This is my version of a hotel filled with wacky characters, and how I envisioned it in 2005.

All would be as it was. That was the idea in the minds of some when the drank. It would be like their wife never left them; like they didn’t have to worry about paying the rent tomorrow. Everything would be like it was before and the stronger the drink, the faster it would get like that. And when the drink wasn’t enough, that was when they turned to Scalpel.  Read Chapter 1 here.