Thor Week continues with a comic that doesn’t want you to know what number it is!  Is this because it’s good enough to be #1 or because it doesn’t deserve a numerical signifier? 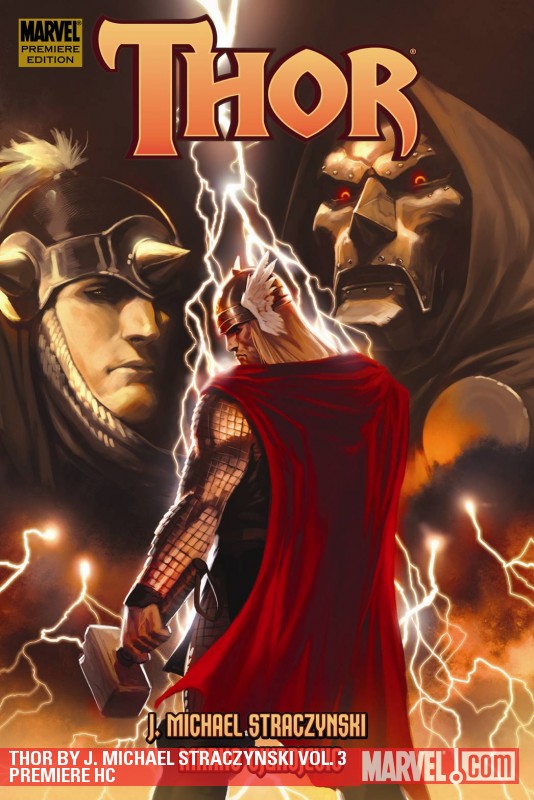 I keep harping on this, but the lack of any visible number or subtitle on the cover of this (the one that I read was the same as the above image minus the red line) really impacted my reading of this comic.  It was my only option at the library, so it’s not like it would have stopped me from reading  it, but it might have influenced my opinions going in as to knowing where I stood.  It’s sort of like the difference between a white windowless van that says “FREE CANDY” on the side and one that says “SEXUAL ASSAULT”: either way you know you’re not ready for what you’re getting into, but in one case, you know what it is.  That said, I don’t feel like I was assaulted in any way when I read this comic…I just wish I had some clue as to what led up to it, because it sounded pretty exciting and, if the writing in this volume is any indication, it was probably pretty entertaining as well.

While this has been one of the driving points of my argument against any sort of “coming of age” story featuring Thor in the modern day, I have since learned that this is not the norm for the character. Even in the 1960s, he was known to share a body with the human doctor, Donald Blake. And so, in order to study up on this character for the sake of Thor and Thor: Dark World, I have picked up my first comic focusing on this character. With a title as simple as Thor, it must be a good place to start, right?

Actually, this is Thor volume 3 of the third volume. The third volume of Thor, kicked off by veteran comic and television writer J. Michael Straczynski, started off with issue #1, until during what would eventually become the second trade paperback of the series, they realized that they had the 600th issue on their hands and reverted to the original numbering. The third book collects issues 601-603 (what can be called Thor Volume Three issues 14-16) and Thor: Giant-Size Finale, because I suppose switching writers in the middle of a storyline constitutes a finale of some sort. Why it is that the third collection in the third volume of the comic’s history merits nothing other than Thor on its cover is a question that is beyond me, so I’ll spend some time in my own wheelhouse: what do I think of J. Michael Straczynski’s Thor 3?

To start with, it introduces itself well enough that anybody picking it up can understand the stakes. From Thor and Blake having a conversation about how Mjolnir was damaged, to the argument between the Warriors Three, to a meeting regarding the state of Asgard between Loki, current ruler of Asgard Balder, and Dr. Doom, there is little in the way of questions necessary to continue forward that are not answered in the dialogue. Thor has been exiled for killing his grandfather, and in the process has damaged Mjolnir so badly that he doubts his ability to continue changing forms between himself and Blake. While in that state, he discovers that his lover Sif is trapped in the body of a dying woman, and that only a reconstructed Mjolnir can save her.

While this goes on, those remaining in Asgard investigate what Doom stands to gain by providing Latveria as a haven for Asgardians. This is both the greatest strength and the greatest weakness of this volume. It is the greatest strength because it features several characters with varying motivations, a mystery, action between characters who are not nearly as over-powered as Thor is, and character drama enough to provide actual stakes in the characters. The downside to this is that it points out just how weak the Thor plot is.

This is not as rare in comics as it may seem. The vast majority of superhero comics are centered around a single character. While a small amount gain sufficient spin-offs to give supporting cast members their own titles (Batman, Superman, Green Lantern and the X-Men, for instance), the majority must keep one eye on the story that the writer wishes to tell and one eye on the story told by the title of the book. In this case, while J. Michael Straczynski tells an interesting yarn involving Kelda, William, Balder, Loki and Doctor Doom, we are forced to return to the titular character, who acts exactly as the plot demands him to and in no other way. The stakes and drama surrounding this character is all illusory. We know that he is going to save Sif, and that it will be at the nick of time. We know that he is not going to be killed in human form. While his friends betraying him might have added some questions to the proceedings, there is not even a hint that this may happen. As a result, while there are holes in what we can predict, there were far less choices for JMS than there would have been in the standard game of Mad Libs, and hence not that much for the audience to be thrilled about.

Even here, though, not all is lost. While Thor himself is as uninteresting as he has been in every medium I have experienced him in, his comic relief fulfill their roles very well. Volstagg is the star of this, but all of the Warriors Three are needed to really pull this off, in a sort of verbal Three Stooges. Also, it seems that Volstagg has a gigantic penis just off-screen that Sif cannot take her eyes off of.

With the exclusion of Thor himself, it is pretty interesting to watch the character motivations and actions. We have everything from a trickster god changing genders without concern, to a god selling the secrets of immortality in exchange for a robot army, to a turn to the mythical in a plot turn that I could see the scribes of Athens putting in. All in all this is the best way that I’ve ever seen to base the stories of Thor with those of the Marvel universe and the modern day. They just had to short-change one character to do it.

Unfortunately, despite being a “finale” this just feels like a large building action. There’s a feeling of emptiness that accompanies being present neither for the beginning – the battle with Bor which kicked much of this into motion – nor the ending – Kelda, Balder and Thor’s reactions to the events in this volume. It’s for this reason that while the volume may attract newcomers to Thor as a series, it’s really long-term fans who are likely to find the most enjoyment in reading it.