Guillermo Del Toro’s long-awaited film about giant monsters fighting giant robots is here.  Is it as good as it sounds?  Or is it better? 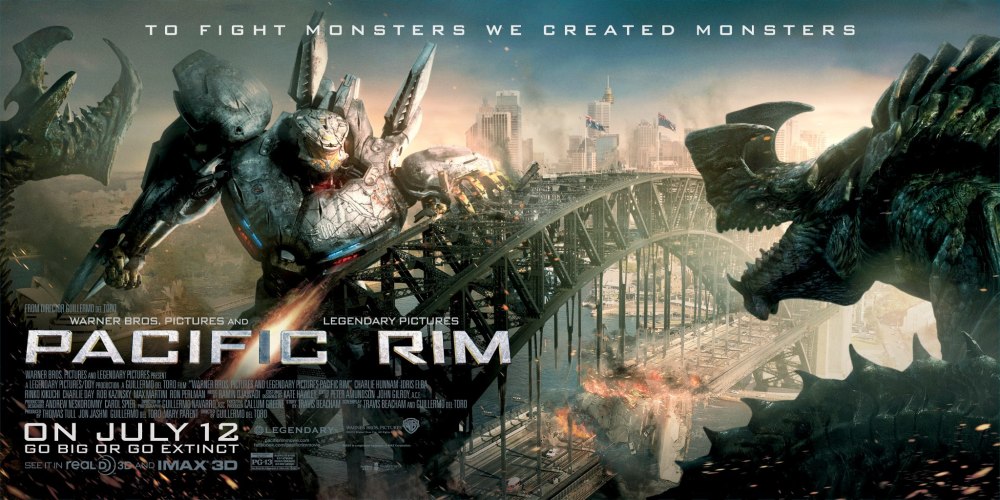 There has been a lot of debate about Pacific Rim since it came out.  This is largely due to the fact that it is hard not to watch this film without loving it, but it’s also a very flawed film.  This was the entire premise of the podcast we had back in the summer, and I expect to have a lot to write about this.  Still, it’s an incredibly fun film to watch, and I intend to do so again.

Let me get this straight.  Pacific Rim is not a Godzilla movie.  Nor is it a Power Rangers movie.  But if you’re a fan of either of these franchises or anything related to them, you’re still likely to love the movie.  Read the review.

Over the summer, a group of people (myself included) got together to talk about what would have made Pacific Rim a better movie.  This planted the seed for what would eventually become Mad Matt’s Super Kaiju Podcast.  Listen to the podcast here.

This article was originally published on July 15, 2013 on Fantasy & SciFi Lovin’ Reviews.

Let me get this straight.  Pacific Rim is not a Godzilla movie.  Nor is it a Power Rangers movie.  But if you’re a fan of either of these franchises or anything related to them, you’re still likely to love the movie.

I have a feeling that one of these is intentional and the other is not.  My point is, Pacific Rim was conceived, promoted and created as a love project for the Daikaiju genre, and watching it is very much the same.  Pacific Rim features the pilots of the men and women who pilot machines called “Jaegers” – essentially Mobile Suit Gundams named after the German word for “hunter”.  This makes the concept land somewhere between Top Gun and the average Godzilla movie.  There actually have been movies with that concept, such as Godzilla Against Mechagodzilla, and I considered doing a step by step comparison of the pros and cons of each movie, however none of the Mechagodzilla films are quite as straight forward.  That’s not to say that this film has less to it than them, just a different focus.

The Godzilla series was born of a nuclear protest film who featured two scientists as main characters.  Despite the series moving, in various ways, far from its roots, it’s never lost this concept.  Godzilla Versus Mechagodzilla II focused heavily on a biologist and an engineer, where Godzilla Against Mechagodzilla followed a scientist involved in the Mechagodzilla project.  Pacific Rim discards this sort of subplot, and in its place fills the plot  with more pilots and character development.

This, of course, invites problems to creep into the screenplay.  Unlike most Japanese features, the film starts off immediately with a Kaiju attack.  This cuts a lot of suspense out of the film, or at least, routes it toward plots that need more setup before they can be introduced.  The following seven years are covered in exposition, followed by another Kaiju attack.  An important scene happens, we cut ahead another five years, and the film finally starts.

If I had to pick out the weakest thing about the film, it’s this.  This isn’t a long period of time, but it is time that could have been developed toward other areas of the plot.  Considering how quickly these things are handled, they could easily have been worked into flashbacks or conversation in order to expand the rest of the film.

That said, little flaws like that aren’t the point here.  This is a film about humanity overcoming an alien invasion by the combined powers of Science, willpower and dedication.  This is about the scene when the largest kaiju ever recorded climbed out of the ocean and roared the Godzilla roar.  This is about the scene where the main characters’ Mobile Suit Gundam seems to at the last of its ropes, until Mako hits the “Sword” button and a chain sword ejects out of its arm. And maybe it’s about the Scientist who does what he was told not to, finds out it works, and goes on a quest to find out why the current plan has no chance of working.  Which results in a giant mech surfing on a kaiju.

There’s a lot of awesome moments in this film, and a lot of really tiny complaints.  There is a scene that is essentially a martial arts tournament where everybody is fighting with a quarterstaff.  The scene is excellent for both character development and action reasons…except for the fact that they’re being tested for their hand to hand combat skills.  The film is full of moments like that, and it’s hard to tell if they’re honest mistakes or if they were intentionally included to keep the tone of the piece closer to that of a normal monster movie.   There is the fact that there are only two women in the film and only one of them has any lines of dialogue, but even that isn’t a huge failing in a film where most of the lines belong to five traditionally male archetypes (arguably stereotypes) and the leading female.

Pacific Rim is a perfect example of a film that is flawed, but can easily be forgiven because the film knows exactly what it is.  It’s unmistakably American, but I suppose even a kaiju purist can forgive that.  It’s certainly the most enjoyable kaiju film I’ve seen that was made in the past twenty years, if not longer, and gives the leads a passable character arc in additional to telling a story with global significance that pays more attention to saving people than the last superhero movie I watched.  I can poke holes in this movie all day long, but never in any way that effects the mood or the story of the film.  What I really have to say, though, is that IDW needs to pick up the comic rights to this property, because a Godzilla versus Pacific Rim comic is something that I would love to read, repeatedly.

If you love movies, if you love tokusatsu or monster films in any manner, Pacific Rim is a film that is in your best interest to ensure that it’s doing well.  More to the point it’s a film that it’s virtually impossible to watch without having a good time.  Just don’t you dare compare this to any Michael Bay schlock, so help me Godzilla.