I finally get to read something by the second mastermind behind The Talisman and Black House. As I step into his world, is it heaven, or a hell dimension? 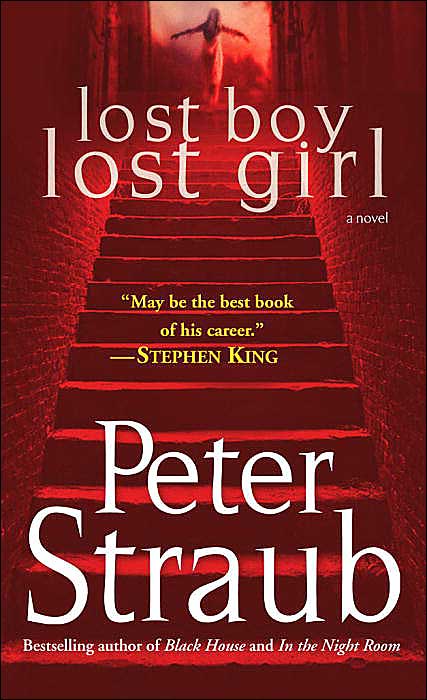 Prior to lost boy lost girl, the only experience I had with the writing of Peter Straub was the two books that he co-wrote with Stephen King, The Talisman and Black House.  Those were two rather good books, so I was a bit surprised when the person who handed it to me told me it was the worst book she had ever read.  I was skeptical of this – the person wasn’t known to be a fan of any horror, and there were quotes from Stephen King and Neil Gaiman on the cover proclaiming how good it was.  Who to trust?

My feelings about this book progressed in three stages.  The first was that of experiencing a good setup.  The characters are introduced, as was a goal, and some strange occurrences.  As we grow to know the characters, we were eased into plot elements such as the visions Nancy had before her suicide and the phone calls years before that.  All of this was done well, if a bit slowly.  I can handle that.  The Shining and Pet Sematary had a slow buildup.  Harry Potter and the Philosopher’s Stone had a slow build-up.  It’s a decision, not a flaw in and of itself.

The second stage was when I hit the halfway mark of the book and felt like I was still in the setup.  The story was taking a leisurely stroll through the character’s lives.  It was clear that terrible things had occurred before and after what I was reading, but it was just as clear that those things weren’t happening “now”.  Thi sis where parallel stories can sometimes do more harm than good.  While lost boy lost girl largely avoids the trap of interrupting at the wrong moments and breaking the tension, it does fall into the trap of divulging the wrong information too early.  It’s hard to feel suspense about a character running from room to room in an otherwise occupied house when you know that he was fine when he met his friend for drinks afterward.

Even the person investigating the disappearance – the narrator – didn’t seem particularly inclined to hurry.  This was no Sherlock Holmes mystery; this was an author walking behind an interesting story and taking notes.  As that the audience was receiving information from several sources that were well out of the “present day” narrator’s reach, the story never reached that moment of discovery where it felt like the story was finally catching up to the hints.  By the time the narrator discovers that the late murderer-serial rapist had once kept and tortured a hidden daughter in his house, this plot point is already irrelevant because he has discovered that the missing boy was already in a sexual relationship with her ghost.

This is where the third stage comes in.  You won’t catch me pleading necrophilia or anything like that – I can tell the difference between a ghost and a corpse – and in context I’m fairly apathetic to the age difference between the nineteen year old spirit and the fifteen year old boy.  No, my problem is that we are led to believe that a child who was kept hidden and tortured while chained to a bed by a man who was known to have raped and murdered many women of varying ages until he finally killer her became a ghost, kept aging and used bondage sex on the bed she died on as an icebreaker the very first time she was alone with a male who didn’t happen to be a serial killer.  Perhaps most disgusting of all is the fact that this is considered to be a good – possibly the best – outcome of everything going on.  The narrator even goes so far as to say the bondage sex on the torture bed makes sense because you make do with what you have.

If you have even the slightest hint of empathy beyond “sex good”, you might see my problem with this.  There are generally three types of people who have been through sexually traumatic experiences: ones who have a system of support and have worked through the scars of their abuse and are able to move on, ones who are terrified to even attempt intimacy (physical, emotional or both), and ones who have reached the point that they believe the natural order of things is for the person in a position of power in their lives to use and abuse their body any way they see fit.  Lily Calendar, an undead recluse, is certainly not in the first category, and obviously not in the second, which places her in the third.  The fact that this is considered to be a good thing, simply because the “lost boy” (who is even given top billing even within the story, despite the fact that she was “lost” well before he was) gets the answers to his questions (and some sexual gratification) is sickening.

Is there a deeper meaning to this that I’m missing.  Yes and no.  Yes, there is something deeper than this.  Yes because, if you read into the context of the story, it is clearly intended to be written by narrator Tim Underhill who is following on his nephew’s case.  The novel consists of the bits that happened while he was absent, his speculations in novel format.  No, because this clearly does not make it any better.  This author character (who those familiar with Straub’s friend Stephen King will recognize is more often than not a stand-in for the author himself) is perfectly okay – arguably overjoyed with this relationship.  He is perfectly fine with the idea that his nephew went and – what, killed himself?  Allowed the local serial killer to kill him? – in order to spend eternity with his ghost girlfriend, the most notable aspect of whose relationship seems to be the sex that they have in the bed that she was tortured, raped and killed on.

This bothers me, and it will keep bothering me, in the way that I may never be able to look at a Peter Straub novel the same way.  The boring, bland novel doesn’t bother me so much.  Everybody puts one out eventually.  Stephen King has put out stories that I’ve shaken my head, wondered what he wasn’t on when he wrote them, and I went on to read the next thing.  But a novel like this that downplays the results of abuse to the extent that the abused girl becomes a prize is one degree away from glorifying the abuse itself, and no novel that somebody was paid to write, then read by an editor, and then charged money for should come that close to being that ignorant.  Avoid this book at all costs.

One thought on “7 Days of Novels: lost boy lost girl by Peter Straub”