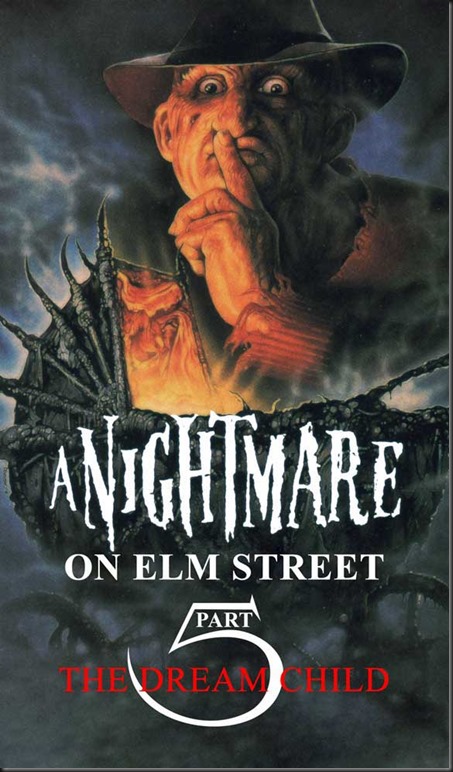 Freddy Krueger was born to Amanda Krueger, victim of the rape of 100 madmen – again. This time, he goes to work as the step-father of Alice and Dan from part 4’s baby, and oh, what a fathering job he does. If you’re not quite sure how a re-birth plot and a surrogate father plot are supposed to fit together, that’s okay; the movie isn’t any more sure.

Upon re-watching this movie, I can’t say I wasn’t disappointed. My only explanation for the beginning of the movie is that they couldn’t think of one. Finally, after they decided on a premise and title, they looked at it and said “Well, the movie is called The Dream Child. Guess that means we gotta have Freddy be born again.” Freddy’s return to his clothes looks like a wanton imitation of Jason’s return to a Voorhees womb, except less dark and less awesome all around. The beginning was so rushed, it felt like a scene in a “choose your own adventure” story, where they are more interested in giving you as much random crap at one time as possible than giving you a good story.

As far as acting…no. Only the returning parts where any good, and they probably owe more than some of their success to the fact that their image brings up a memory of the last movie. Nick Mele does a good job showing the changes in Alice’s father since the events of the previous movie, Wilcox falls into the Alice character as she was during her final confrontation with Freddy, and of course no one besides Englund could successfully play Krueger.

Beyond that, the characters disappoint me still. Dan was a filler character in The Dream Master, and he comes back as a filler character in The Dream Child. About the most creative bit of characterization in this character was “Dan didn’t drink.” Alice was definitely a huge let-down of this film. She seems to have lost of forgotten about nearly all of her new powers and all of the confidence she had last time she faced Freddy; the Alice from Dream Master would have stepped on baby Freddy’s head instead of stepping out of the way. This drains a lot of the potential out of the idea of a baby with her and Freddy’s combined powers. The new characters were given just enough depth to die, a new low for a series which had previously always made sure the audience at least cared about their deaths.

The gore in this movie was almost non-existent, and the effects director seems to have given up the look of the earlier movies for the quick, cheap results afforded by animating the effects. The result is shitty effects that make you want to turn off the movie as soon as you see that green…stuff…in the fridge.

Overall, I must say watching this movie paying attention to more than the life and times of Jacob was a mistake. His mixed breeding is really the only thing going for this movie, Freddy included – remember, he lost all of his souls in the last movie, and has no capacity for new tricks right now. If you’re an extremely casual viewer or a new fan on their first run of the series, focusing on the inherent thrills of a slasher film and the gimmicks themselves may give you some cheesy fun. Beyond that, The Dream Child would be best served collecting dust at the back of the shelf.