Doctor Who has recently picked up the director of Freddy’s Dead to direct the season finale. I guess it’s a good time to see what Freddy’s Dead is really like… 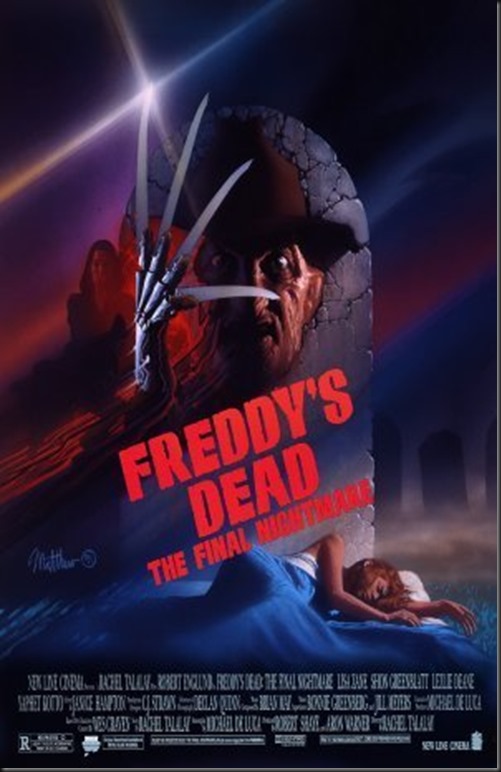 The tagline of Freddy’s Dead: The Final Nightmare should be “get out of the way horror, Freddy’s gone comic!”  Beyond the first scene or so of this movie, the idea of a real Nightmare movie is quickly forgotten. While any town in the wake of an ongoing child massacre (and by child massacre, I mean apparently anybody below the age of forty) would be in shambles, the caricatured insanity of Springwood in Freddy’s Dead is beyond any semblance of reality. It wasn’t even funny; the scenes could have been funny with some directing, but instead they just look like shit. The Flintstones sound effects in the game dream sequence reinforce the sentiment that Freddy gave up horror films to make shitty comedies; if this had come out a good 15 years later I guess it would have been produced by Sam Raimi.

You’d think they at least would have learned a lesson from The Dream Child and brought back some of the time-consuming yet awesome clay effects from the earlier Nightmares. No, they just put in a lot of falling and rising scenes (though of course they couldn’t bother to do so in the actual 3D part of the film) and parodied their own animated effects by pulling the stoner into a TV and giving Freddy the line “Great graphics.” At least they didn’t use “I love the Power Glove…It’s so bad”. Wait, wrong review. And…I don’t think Freddy used that line. Now that I think of it, it would have fit in context Oh, yeah, and there was a 3D part, complete with Freddy’s face… doing something pointless. There was barely any gore to speak of, mostly from when Freddy got stabbed in the hands. Freddy’s Dead was the brightest lit of any movie in the series, destroying any fearful effect many scenes would have had on the viewers. The characters were scared, at least.

The one continuity reference was a blooper in itself. “First, [in the original Nightmare] they tried burning me. Then, [in the third] they tried burying me. Then, and this is my favorite, they tried holy water.”  Did I miss a movie?  Unless I missed Nightmare 3 1/2: The Dream Bath, the only use of holy water in any movie in the series was in the same scene that they buried him – before they added the dirt.

This movie features what has to be the dumbest jump to conclusions in American history, and that’s saying something. ”I’m Freddy’s son!”  I almost wanted to go to Springwood and choke the idiot, until I looked at the movie and realized that no real place could look so fake. An almost equal jump to conclusions – the one that gave the movie its title, occurred at the end. Somehow, the makers of Freddy’s Dead came to the conclusion that defeating him the same way he was in the first movie, plus the addition of 3 ridiculous-looking “demons”, made him more dead than he was before.

One good thing this movie had going for it was the increase in character development. The addition of the traumatic experiences in the characters’ pasts made any one of these characters more developed than every character from the 5th movie put together. Then, they screwed it all up by not going into any detail about how the child psychiatrist received ninja training in the art of throwing bladed weapons. How careless.

One thought on “7 Days of Nightmares: 1991’s Freddy’s Dead: The Final Nightmare”