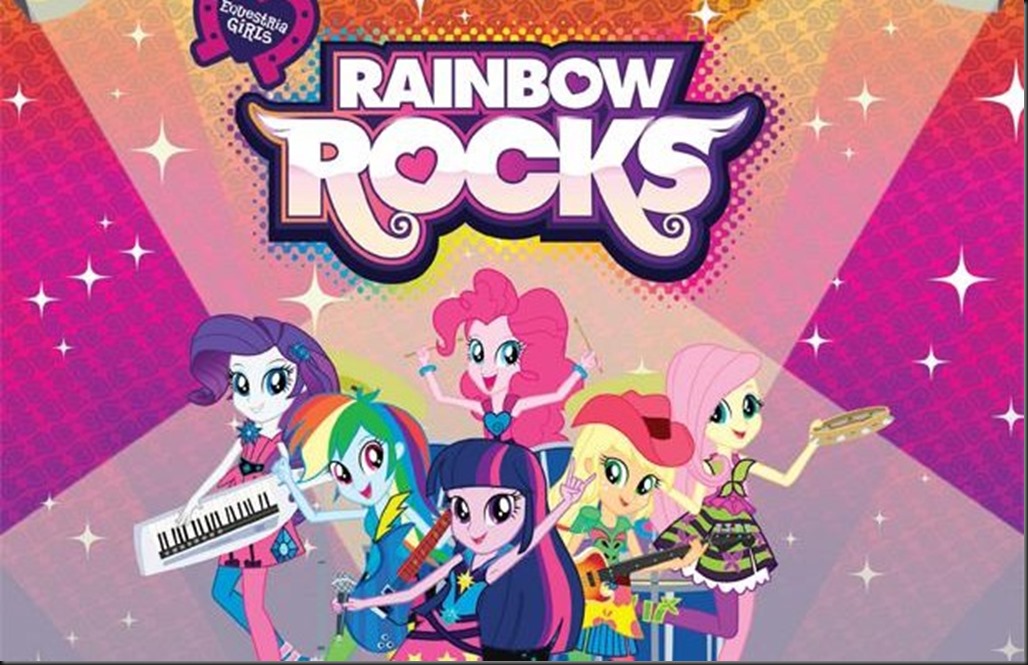 One of the more interesting aspects of the 2010s is the ’80s/’90s cartoon nostalgia projects. Almost any property that was popular in the United States between 1980 and 1995 is seeing a resurgence. Dragonball Z and Sailor Moon are seeing a comeback; Power Rangers is having a nostalgia-laden 20th anniversary special series; and Transformers, Teenage Mutant Ninja Turtles and G.I. Joe have all seen a cinematic revival. The age 25-35 demographic wants the shows of their youth back, and as most of these were of the “30 minutes toy commercial” variety, sponsors like Bandi and Hasbro are only too happy to give them what they want.

In the midst of this, it was inevitable that My Little Pony would see a revival, culminating in the highly successful Friendship is Magic series, targeted at kids and parents of all genders. Just as inevitably, Hasbro put out a toy that they could not sell with a regular episode, causing the show to move into off-season theatrical productions. Enter the Equestria Girls series of movies. The first film, released in 2013, made a splash by being the most obvious toy commercial in a series of them, and taking the series a bit outside its animation wheelhouse by moving on to bipeds.

Rainbow Rocks comes a year later, and brings with it the experience of making the first film, as well as the established universe. The film features Pony leader Princess Twilight Sparkle as she returns to help her human friends against a trio of villains exiled in Equestria’s past. The film improves on the original in several ways, but ultimately struggles to reach the depth of the average Friendship is Magic episode. Twilight Sparkle comes to this film after learning her place as a Princess of Equestria and leading her friends to gain Super Saiyan-like alicorn powers they can use as a team. For the humans, most of the school year has passed, and while their shared experience has made them friends, the rest of the school still looks at Sunset Shimmer as the villainess who tried to take over the world a few months back. As a dedicated calendar and school year are among the things the Friendship is Magic series at large lacks (its main cast generally depicted as though they are the equivalent of young twenty-somethings), it is difficult to discern if this is due to Season 4 taking place in a short period of time, lazy writing, or a difference in the passage of time between dimensions, though the cast questioning why millennia-old sirens were surfacing in the modern day suggests the latter.

The first Act focuses on bringing together the elements – not of harmony, but of the plot. The five humanoid counterparts have formed a band, with Sunset Shimmer having seen the error of her ways and becoming their…mascot? Sidekick? Groupie? She seems to be their only friend who is not in the band, but not for lack of interest. This may have to do – as the characters keep reminding us – with the fact that she almost destroyed the school a few months back, but it might have to do with the fact that these are selfish, pre-season 1 counterparts of the cast. If it were me, it would be because when confronted with a trio of girls making sinister comments about magic and making people do what they want, it didn’t even cross this ex-sorceress’s mind that this would be a problem until they cast a spel on half the school. Sunset Shimmer did prove her worth, though, by providing a link between the movie world and that of the series in a way that should remove the need to make a new movie every time Hasbro releases a new anthropomorphized pony figure.

The other side of this link, of course, is Twilight Sparkle, the only member of the main cast to truly feature in this movie. This is oddly fitting, as the last episode to focus heavily on developing “The Princess of Friendship” was the last Equestria Girls film. Twilight starts the movie off strong, in the vein of the Victorian inventor using Sunset Shimmer’s communications to open a portal between worlds. She explains this by…randomly quoting a Calculus tectbook, probably because she expects her audience not to understand her no matter what she said. Twilight isn’t called on until after the threat is established, so the exposition scenes of the villain origins fall to her. Her research is not enough, however, and she realizes that participating in the plot of the film is the only way to activate her allies’ latent magic.

While I rarely go out of my way to watch a musical, realizing within the first few minutes that this film would be one of those did not bother me. One reason for this is that Friendship is Magic is a musical series, with characters often bursting into unexplained song. More importantly, they are good at it. Besides, if you need to find a way to pad out a 20 minute episode concept into a 75 minute feature film, going with your strengths and providing a variety of music is not the worst way to do it. In this case, the villains are based on music, Twilight comes from the aforementioned musical series, and the humans discover that their own magical powers are tied to music. It’s a good thing they formed a band between films.

The first Act – songs and all – highlights the biggest strengths Rainbow Rocks has over Equestria Girls. Much of Equestria Girls was about Twilight Sparkle as the fish-out-of-water. This is one of the best known tropes in fiction. Aside from a few stand-out moments such as Thor demanding more, however, it’s not because the audience enjoys it; it is because it is immediately recognizable and because nearly everyone on the planet is familiar with it. It is awkward, uncomfortable, and literal torture for the viewers to watch as they cheer on the fish attempting to breathe air in order to reach the next stage of the story. The sequel film does away with this, allowing Thor, Captain America, or Twilight Sparkle to jump into the action and move the plot along instead of stalling it for twenty minutes.

While the fish out of water segment is gone, that doesn’t save the film from cliches altogether. Once the film is set up, the next third of the film is the spiral into bickering. Next to the fish out of water, this is probably the most-used “familiar but not entertaining” trope. This isn’t new to Friendship is Magic, but by and large the show has moved past this. There are only so many times a close-knit maturing group can believably be made to hate one another.

During this bickering, Sunset Shimmer starts to become a problem. It’s not because she is unfairly scrutinized or heavily (and deservedly) involved in the bickering. It’s because she’s a witness. She’s not even a witness – she’s an audience member. In a series with ten main characters that normally does its best not to need a dedicated audience surrogate, Sunset Shimmer seems locked into the role in this film. She’s not like Twilight, bringing her outside experience to the strange problem. She’s not like the human cast, caught up in the plot in a situation they can barely handle. She’s just…there. She isn’t part of the problem; she’s not part of the solution until it’s too late. Both of these could be forgiven if she played a unique role, like that of Hikari in Digimon Adventure’s version of this plot, but she doesn’t even do that. This is particularly apparent as the story attempts to engage her and falls flat. She has ample reason to stand up, and never does.

The Problem of Sunset Shimmer is a prime example of why the Equestria Girls series is an inferior knockoff of Friendship is Magic. While the show seeks to engage the viewers, challenge their habits and ways of interacting to push them to grow, Equestria Girls and Rainbow Rocks are ultimately interested only in providing a spectacle. This is no more apparent than in the case of a song written for character development was written, but never fitted into the script, resulting in it being used only in the opening credits. Sure, the characters learn from the situation…in one scene, the cutting of which would impact nothing else in the movie.

I say Equestria Girls and Rainbow Rocks are out only for the sake of a spectacle…that’s not entirely true. I’ve made the occasional references throughout this discussion to the film being a 75-minute toy commercial, and these films wear that fact on their sleeve. Trixie – a character popular with fans due to her flamboyant attitude – is a character reintroduced in human form in Rainbow Rocks. Trixie holds almost as much screen time as a member of the main cast, and there are several other Friendship is Magic characters that get a similar treatment. Surprisingly, the third of the four princesses that rule Equestria – Twilight’s friend Cadence – does not get a redesign in this film. Perhaps they’re saving that for the next release, but I would have thought this film’s plot lent itself perfectly to, say, the Principal of a Crystal High School having reason to visit.

Cut down to twenty minutes, Rainbow Rocks could have been a standard quality episode of Friendship is Magic. At full length, it’s a passable spectacle, but extremely muddled in its execution both in plot and character development. Its animation is a step up from Equestria Girls to the point of being what you would expect from a higher budget version of Friendship is Magic, save a few out of place animations that are probably left over from the previous film (unless Celestia and Luna were simply intended to be as creepy as possible), and the plot has grown along the same line. Give it two or three more films, and Equestria Girls might even reach the level of quality one expects from the Friendship is Magic name…but does it deserve that many tries?

One thought on “7 Days of Movies: 2014’s Equestria Girls–Rainbow Rocks”