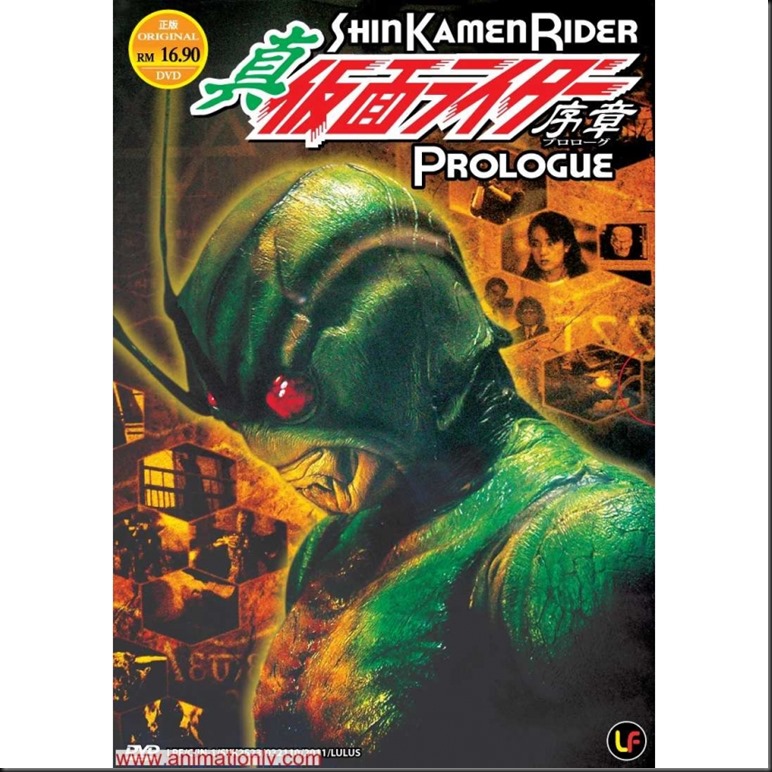 As Kamen Rider approached its 20th anniversary, the show had been off the air for several years. It was now the 1990s, production styles and audience expectations had changed, and by the time Kamen Rider would return to television screens again in 2000, both would change even more. There was no longer an audience for cyclists in vibrant grasshopper suits fighting against campy villains. The natural step, it seemed, was to move the franchise as far away from these elements as possible.

The proposed trilogy of Shin Kamen Rider films, therefore, became gruesome horror films in which Shin became a Kamen Rider via genetic manipulation and unknowingly slaughtered innocents in his sleep and removes his opponent’s skull and spinal column as a finishing move. Also, like Kamen Riders 1 and 2 in the 1970s, he is based on a grasshopper.

It is perhaps needless to say that such a radical departure from the original material was not well received by fans. While Ultraman joined Kamen Rider on a hiatus at the end of the Showa period, Super Sentai carried the tokusatsu torch at the time, airing the landmark Kyoryu Sentai Zyuranger – the source of inspiration and footage for Mighty Morphin Power Rangers – in the same year. It was plain to see for all involved that while Shin had the better production values, Zyuranger was the only one that looked remotely like what tokusatsu fans were looking for.

But does that make Shin Kamen Rider (still Prologue, but the second two films were dropped) a bad film? Not at all. It just makes it a horror film (complete with gratuitous nudity) with tokusatsu elements. In fact, Shin is rather ingenius, combining elements such as An American Werewolf in London‘s transformation scene and nocturnal monster dreams, David Cronenberg’s remake of The Fly‘s half-breed baby, and Kamen Rider tropes such as redemption, hope and martial arts, into a single piece that can’t help but to be remembered, regardless of how you feel about it.

While the visuals are top-notch (the comparisons to two of the greatest makeup films of the 1980s don’t come unearned), the writing sometimes leaves something to be desired. Some of the best moments come when adapting plotlines from the original Kamen Rider (With Shocker being replaced by an evil Corporation that personally reminds me of Rossum) or the fore-mentioned horror film plots, but when there is not a strong direction to move, the writing starts to slack. The best example of this is Ai, Shin’s love interest. They are friends, they have some vague feelings for one another, then Ai takes a shower, goes swimming with Shin, and turns up pregnant with his grasshopper-baby. This takes a semi-clever turn when, rather than the symbol of fear that the baby acts as in The Fly, Ai considers the fetus to be a symbol of hope: that no matter what happens, she and Shin will live on through the baby, which naturally leads to Ai being ceremoniously discarded and carried off into the closing credits.

Still, there are certain levels of writing that are acceptable for certain styles of content, and for a martial arts film about a were-grasshopper, I find the most disappointing thing about the writing to be the fact that this is clearly the pilot for a new series – film or television, it remains the same – that never took place. Had Miyashita Jun’ichi and Onodera Jou known that this would be a standalone feature, the nameless Corporation might have been dealt with in a more final way, and Shin might have done some Kamen Riding. The end result is, while not a perfect film, a great way to kick-start something that fizzled due to lack of a proper audience and something that I really hope gets its due one day soon.