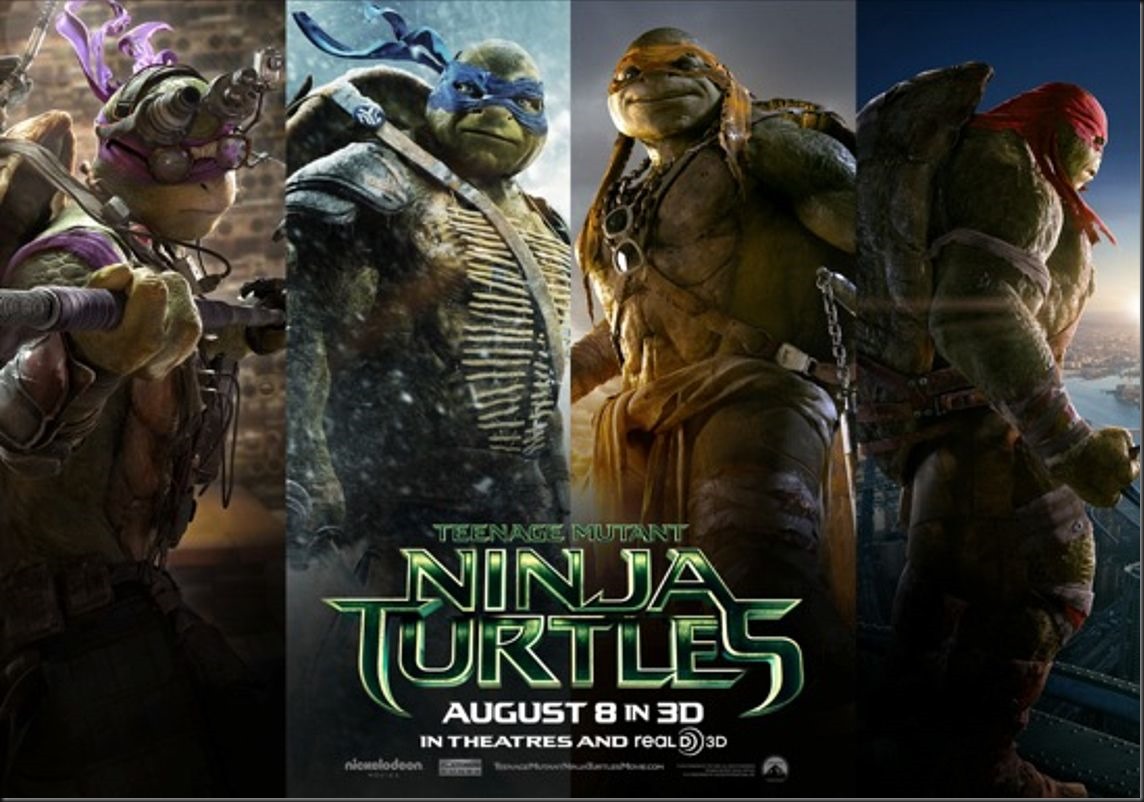 Since before I can remember, I have been a fan of Teenage Mutant Ninja Turtles. One of the earliest things I can remember owning is a TMNT lunchbox. While I had largely given up after school television by the time the second animated incarnation came around and didn’t know about it until after its cancellation, I enjoyed watching The Next Mutation every day after school.

I tell you all of this so that my position is clear. Once a fourth live action theatrical film starring the turtles was announced, nothing was going to prevent me from watching it. While some used their fandom of the original trilogy of films as an excuse not to watch a film with Michael Bay’s name attached to it, I remembered that Steven Spielberg’s name was just as attached to the last franchise that Bay drove into the ground and decided to let the movie speak for itself.

And speak for itself it did. As with all adaptations of the source material (none of which, I should mention, have been remotely like the satirical comics they were adapted from), the film had its idiosyncrasies. In this version, the turtles were as physically imposing as their superhuman strength would suggest, and there is once again a love triangle featuring April O’Neil (poor April; she may never be free of this), this time featuring Michaelangelo and Vern. The origin of the story is different, with the turtles being the result of human experimentation. Perhaps the biggest difference of all is that, rather than the Shredder being a villain named Oroki Saki, there are two villains: the Shredder, and an Anglicized version of Saki’s name in the form of Eric Sacks.

Taken together, these can be considered pretty big changes, but it is worth keeping in mind that few of these facts were ever static in nature. Over the past thirty years, the turtles have been the result of alien interference, accidental mutation by alien material, and mutation caused by manmade material. The Shredder has been an independent villain, a villain made threatening by his alliance with aliens, and an alien masquerading as a long-dead human. Any and all of the turtles and their allies have, at one time or another, been smitten with April O’Neil, who has been a schoolgirl, a TV reporter, and a secret agent with varying degrees of skill and lack thereof. Even the Shredder’s minions have ranged far and wide. A made-for-TV animated film was released in 2009 highlighting the disparate Turtles universes as a multiverse adventure, definitively pinning down the fact that there is no “right” and “wrong” version of the story.

With these variables in mind, it is clear that the 1990 movie is the story this film works hardest to emulate. Like in the original series, April O’Neil works for Channel Six and wears a yellow coat, although in this instance she is a morning show host rather than an investigative reporter. The turtles say “Cowabunga”, and Splinter was born a rat, not a human. Beyond these ties, however, this film is as much its own story as the numerous previous versions of the story. Still, it is filled with references to the Turtles universe. Michaelangelo is working on a Christmas album. One of the Shredder’s first lines is “tonight I will dine on turtle soup”, a reference to the original five-episode season of the 1987 animated series. Saki makes a reference to the fact that rabbits were intended for use in their experiments before turtles. Karai, the name of Shredder’s daughter best known for her appearances in the 2003 and 2012 animated series, is the name of Shredder’s top lieutenant, though it is not stated whether or not they are related.

It’s pretty clear that somebody on the writing team did their homework. On the next Star Wars or Star Trek movie, that much attention to the series’ past would guarantee it to become one of my favorite movies in recent history. The rest of the writing would not to commit some pretty egregious sins to detract from that.

The writing does indeed struggle. There are three credited writers on this film, barring any changes made by the Director or any Producer interference. As expected, the script is a mess. The changes made to the origin seem to be a pretty clear instance of not being sure what this film wants. The dialogue is stilted and does a better job making April seem legitimately crazy than like an honest reporter in a difficult situation (“They were my pets. They were my pets, and they were named after Renaissance painters.”), even though the film is clearly setting up a “nobody believes the plucky protagonist” situation in Act One.

Other flaws in this story are ones that I came into this film expecting. I know what the name Platinum Dunes means. It means that while I was disappointed, I wasn’t surprised to find that Vern was more interested in oggling his former employee’s anatomy than driving during a life or death chase scene. I expected the groaningly long fight scene down a hill that must have been bigger on the cliff-side. I did not expect the ridiculous amount of effort that went into making Donatello – a ninja no less socially capable than his brothers – into as much of a stereotypical nerd as possible. The pointless and unnecessary love triangle was equally expected and equally rubbish.

The result here is that on top of the research, the film itself is pure fluff. The story is new in the details and sets itself from other incarnations of Ninja Turtles, but when you put them together there isn’t all that much new about it. Character traits are exaggerated, but there is no reason for it. The “experimentation” origin gives plenty of room to explain the almost caricatured differences (such as if Donatello was an experiment for a super-intelligence gene, Raphael for a steroid), but the film is not interested in going to lengths so much as it is in entertaining people for an hour, which is disappointing.

There are some nice touches, not in the form of original storytelling, but in the form of small bits that are of equivalent importance to the nods to Turtles history. A seemingly unimportant game shown from the turtles’ childhood turns out to be the key to their using teamwork to finally overpower the Shredder. There is some nice animation in the beginning of the film, though I would have liked to see it used more (perhaps during Splinter’s flashbacks). The turtles act as real brothers, even going so far as to back Mikey up when he turns a no-longer-Hollywood-legal moment of quiet anticipation on an elevator into a comic relief beatbox session so as not to have the scene cut.

It is the good bits that make the bad bits so disappointing. I hold no delusions that the lowest-common-denominator content could have been cut, but the project named “Project Renaissance” could have been used in a dialogue scene to make the exposition less painful. Adrenaline and cocaine could have been acknowledged as different things and possibly even lead to a temporary “Red Sky” mutation instead of causing the turtles to want to clean the lair.

Teenage Mutant Ninja Turtles 2015 is never going to be accused of being the best Turtles movie, but nobody thought it was going to be. It is a movie that pays homage to decades of history and has a few worthwhile moments. The sins that were committed, from the excessively busy Shredder costume to everything about Vern, were not excessive enough to ruin my enjoyment of this. This is a film that someone watches to see more of the turtles, and let’s face it, there’s not always enough of that.