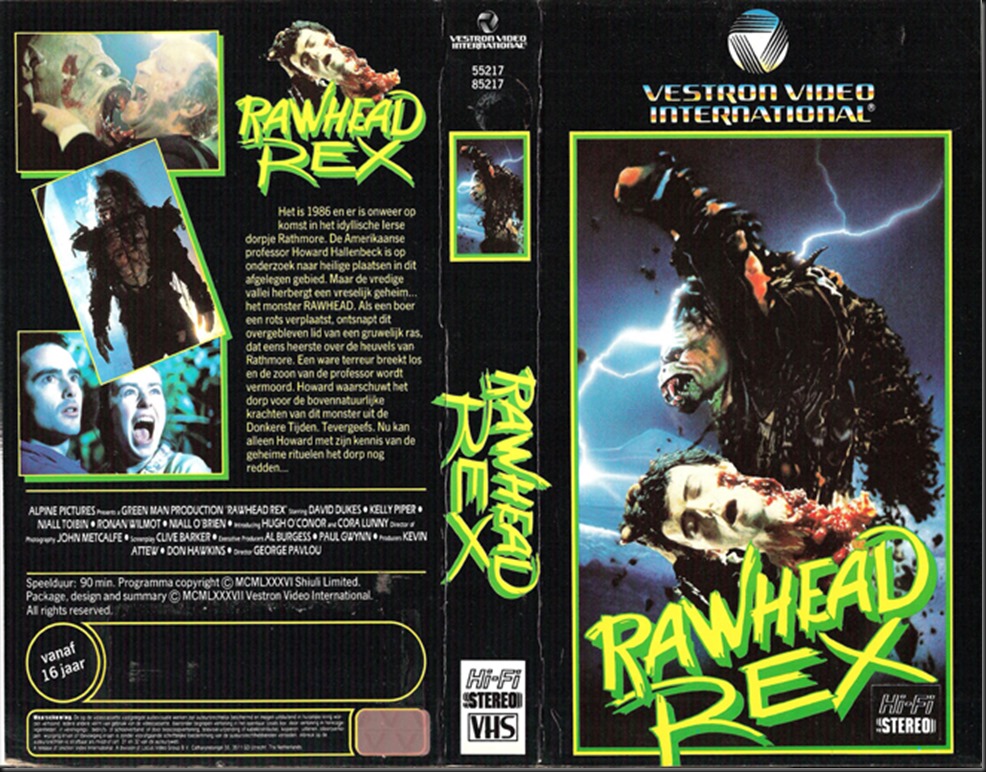 I enjoy watching Rawhead Rex. It is a movie that I can turn on and know that I’ll have a good time. For that, I have to give it a positive review. By no means can I consider this to be a good movie; in fact, it’s one of the few movies that I’ve been a staunch supporter of remaking with a new look, though a film featuring the countryside being menaced by an anthropomorphic penis is unlikely to garner very much of a budget.

Rawhead Rex features an ancient demon menacing the countryside. It also features more Barkerian imagery and symbolism than you’re likely to find anywhere else. Rawhead Rex is a demon of id, vandalizing and murdering his way across the countryside after being freed from his large phallic prison, until he is defeated by his most ancient enemy: a female fertility statue.

I’ll admit, outside of what little I’ve come across, I know very little about the original Rawhead Rex short story, due in large part to never having been able to succeed in buying the Books of Blood. What I do know is that Clive Barker is a skilled author, if a bit blatant in his views, whereas this screenplay is not the result of his skill. I’ve heard stories of Barker being livid about this film and refusing to acknowledge its existence, though unfortunately the film is a little obscure to find much in the way of production trivia about it. Lacking sources, I can only go off of what I can see, and assume that one of the following is true: good story-writing does not translate into good script-writing, or the script featured heavy rewrites due to the actors and director. If I’m to be honest, I think it’s both.

Somehow, Rawhead completely fails to sell a horror mood. The dislike Piper’s character feels for Ireland, the actions of the birds before the little girl screams and Dukes’s character’s reaction, the movie goes through all of these motions and yet, it doesn’t work. Everything looks, feels and sounds like it’s scripted, instead of scary. That statement can summarize this review: there were a lot of good things in place, but there was no one around to pull it off right.

The acting in general is as uninspired as it was during the failed mood-setters. The stars stand out so little that I’m hard-pressed to consider them stars. I’m not even sure why Kelly Piper is listed in the opening credits as a star; all her character does throughout the movie is support her husband. Ronan Wilmot’s Declan O’Brien stands out as the main role of the film, and even he struggles to seem like an actual person reacting rather than someone attempting to handle scripted lines and waiting for his action cues.

As for Rawhead Rex himself, it might have been better for Director George Pavlou to learn a little something from Irving Kershner and hide his wampa. There are no full frontal views of the Rawhead costume until about halfway through the film, but with this costume, even that is too early. It is clear that Rawhead’s original design was never going to make it to film, but this is about as functional as a Halloween store gorilla costume, complete with the inability to move his head.

Without any sort of description of the demon’s nature, he seems more like a child than a masculinity demon. Granted, given that he represents a mind driven by testosterone and completely lacking in reasoning beyond that of the id, there is not much difference; I imagine that the short story version included some sort of sexual crime that would probably differentiate the two, but it’s probably a good idea that the film opted not to do so. Without that, though, the wild, child-like reactions and flailing arms give the impression of a giant, monstrous toddler.

If I were to join Pavlou in pretending that the Rawhead costume is sufficient, I have to admire the charm of the ’60s movie graphics in a 1986 movie. The final confrontation reminded me of original series Star Trek, and the lightning in the beginning doesn’t look half bad. The gore effects, however, were not on par with the rest. Only once do you see liquid blood; everything other time it’s just makeup or painted on a wall and looking hours old even when relatively fresh. The severed hand didn’t even look like a hand. Probably the best piece of gore was the headless body – and the accompanying head – which was shown in the perfect lighting to compliment its budget: dark, lit by a flashlight.

As we discuss the attempts at visceral effects, I have to express my frustration at the decision to make this film R-rated, but avoid any of the options that opens up. Generally, an R-rated film is allowed to have more violence, more realistic effects, and more sex and nudity than a PG-13 film. Given the subject – an admittedly watered-down demon trapped by a giant phallic shape who is defeated by a depiction of female genitalia – and the fact that more violence and realistic effects were clearly outside the realm of what the production team was able to deliver, some sexual content actually would have improved this film. Again, this is a monster of unrestrained desire with a wealth of masculine imagery; some relationship between him and sex would not have been gratuitous.

I was irritated by the near lack of R-rated material here. If there’s going to be one tit shot to bump the movie up to R, then where are the sexual scenes beyond simple tongue-in-mouth? Had they cut the one instance of tits, this could almost certainly have been marketed as PG-13; if they had to take the step up to R they could have at least gone all the way.

I mentioned earlier that Barker had a tendency for conspicuous symbolism, and that in shows in this film. The biggest difference between Clive Barker and Stephen King is that while King tends to show faith in the unknown and the good of the concepts of faith and God, save for the waywardness of fanatics, Barker’s work demonstrates a clear apathy to the Christian church. Both Hellraiser 3: Hell on Earth and Rawhead Rex feature their villains clearly violating a church, unconcerned about the presence of any god within. He seems more impressed with Phantasm – there is a bar named “Tall Man” which seems to be a pretty clear homage to Rawhead‘s fellow cult classic.

Most fans of low-grade horror are likely to find themselves enjoying this film, even if it takes some background knowledge to understand what it is trying to communicate, though it may take a strong imagination and a fondness of Clive Barker. Just don’t set too much score in the technical aspects of the film and focus on Rawhead. Look deep into his eyes, in fact.