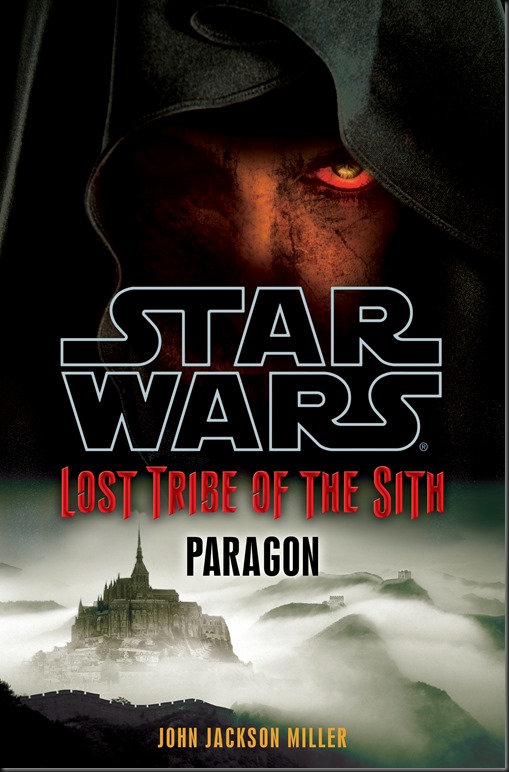 Paragon is two things: it is the first story in this readthrough that I actually have a gripe with the title of, and it’s also the most truly Sith story of this series. Paragon is set fifteen years after Precipice and Skyborn (and Fall of the Sith Empire), and features years of schemes building up. While this story heavily features both Korsin and Seelah, it’s pretty clear that this is Seelah’s story.

Paragon’s title is…somewhat fitting. That’s really the highest compliment I can give it, and that’s largely because a single-word title has to work really hard not to fit at all. Really Invincible is the only one I can think of that actually has no meaning. In this case, a paragon is “a model of excellence or perfection of a kind” or “a peerless example”. The first example fits because of ethnic cleansing. Because when I think of Star Wars, I think of paragons of ethnic cleansing!

For our “peerless example”, Yaru Korsin has now donned the title of Grand Lord to further subjugate the Keshiri. With the aid of the ever-scheming Seelah, who still wants his head (though she’s now married him and given birth to his now ten-year-old daughter) and his other minions, he’s solidified the Sith’s power hold, first by creating a new caste above the ruling Neshtovar, then by demoting the Neshtovar themselves This is accomplished through a blend of demand and oratory: Not willing to settle for the Skyborn of popular Keshiri mythology, they dug deeper, declaring themselves the Protectors of a forgotten myth, simultaneously proving their “knowledge” of Keshiri history and removing the “children of the Skyborn” of their birthright.

All of this is just background dressing, though, as the focus of Paragon is the hidden conflict between Seelah and Ravilan, leader of the remaining Red Sith on Kesh and of those Sith who believe all of their group efforts should be focused on finding a way off of Kesh. Not without reason – in Precipice, the majority of their number were killed by something in the air, and in the fifteen years since then, none of their offspring have survived more than a day. Coincidentally, Seelah is also in charge of all of the Sith healing, including the midwives. And has a grudge against Red Sith due to formerly working for an abusive, racist Sith Lord, because if there’s anything the past twenty years have taught us, it’s that characters who used to simply disagree with the person who later won the argument must be proved to be utterly irredeemable in subsequent stories.

While I’ve probably given enough away to discern the direction this story goes, I still think it’s worth reading, and again, it costs you nothing but a few minutes to read it, so I’m not going into any more detail. Suffice it to say that Seelah’s coup is coming any time, but she’s also very patient, and by the time you finish this story, you’ll believe that she’s capable of it.

What I really like about Paragon, though, is that Yaru Korsin is written as largely an unknown quantity. Even Seelah doesn’t understand his motivations all of the time. We’ve seen him grow from a reluctant warrior, a Captain who doesn’t like to discipline his troops but doesn’t shy away from it, who kills his brother because the alternative is to be senselessly murdered, to someone who will kill his own men for stepping out of line – after already authorizing their slow murder for the simple crime of creating factions that are more difficult to govern.

As a final note on Paragon, I enjoyed comparing Seelah’s philosophies to two sets of more modern Sith: Darth Sidious, also known as Emperor Palpatine of the film era, and the Lost Tribe of the Fate of the Jedi Era. While Seelah obviously doesn’t share Palpatine’s prejudice against women, the callousness with which she deals with the Red Sith are very reminiscent of the policies of Palpatine and the worst of his followers. I wouldn’t find it altogether shocking to discover that Palpatine had been abused by Darth Plagueis in his day, and while that doesn’t make either of them anywhere near acceptable or remotely likable characters, it does make interesting reading. Not that either of these two Sith need a motivation to kill those who are inconvenient and available.

The other philosophy of Seelah’s that I find worth noting is her emphasis on physical beauty. This was already a thing with the Keshiri, but for Seelah, it’s a reason to trim the herd – that, and the fact that at this point Seelah’s values are much more influential than those of the Keshiri. I’m curious as to how much of a lasting effect this has, but as Seelah mentions in the story, her actions do have a direct influence on the physical attractiveness of the Sith on Kesh (to a human). This brings them closer in line with the prevailing values of the natives, which makes it much easier to adopt those values.

It’s at this point that I found myself drawn into this series. Precipice and Skyborn gave us a setting and the beginnings of true characters, but Paragon starts to set up a conflict to really tide Lost Tribe of the Sith through.