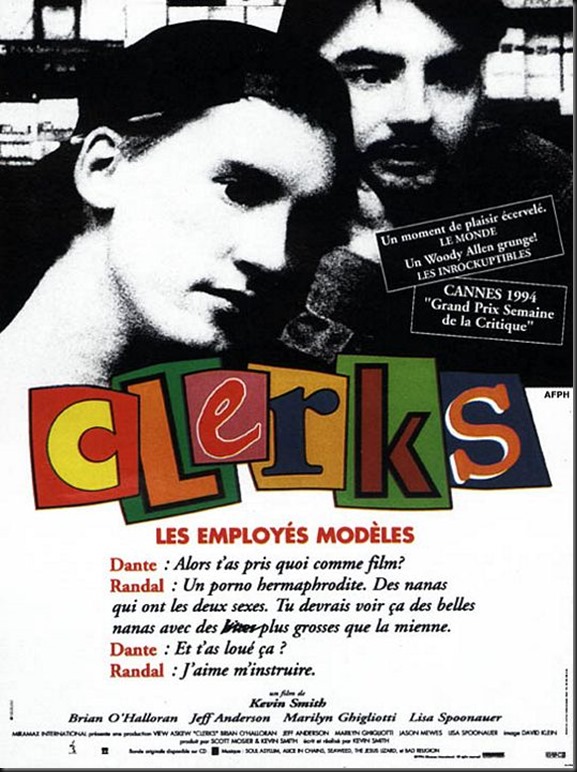 Clerks. is a horse of a color you don’t often expect to see in Hollywood. No, literally, it’s in black and white. It’s also an independent film that amassed a huge following, strictly on the virtues of dialogue and other elements that director Kevin Smith had little control over. Is it as good as its fans would indicate, or is it indicative of Kevin Smith having made a deal with the devil to obtain his film and comic career?

Clerks. is about a day in the life of Dante, a well-meaning convenience store clerk who can’t help but give in to his best friend Randal’s persuasion any more than he can keep his personal life in order. When he’s called in to work on his day off, he’s forced to juggle between his plans for the day, his relationship, the return of his cheating ex who he is more attracted to than his loyal girlfriend, and the ins and outs of life in customer service. Meanwhile he struggles to answer the question: is he afraid to initiate change?

All of the drama is played for comedy, but some of these are very real questions. What do you do when you have more interest in someone you know is a terrible long-term investment than somebody you like a little less, but is great for you? Of course, this being a comedy, every decision Dante makes turns out to be the wrong one, so there’s plenty of humor to derive from this. In addition, we have Randal, someone who has absolutely no interest in societal norms (and is glad to read graphic porn titles over the phone in front of a mother and her young child). Caitlyn and Veronica are each great characters, and while much of the acting is a straight line-reading, the script calls for non-stop laughs. This is also the film that first introduces Jay and Silent Bob, and while they’re not as hilarious here as they will be later (Jason Mewes, for instance, was terrified of appearing on camera, and Kevin Smith was a little busy directing his first feature film), these two legendary characters’ debut cannot be ignored.

Clerks. is in black and white, which is useful in that it disguises many of the wardrobe errors (such as coats changing from scene to scene or disappearing and reappearing several times in one scene) though not very appealing to the eye. The signs (“I assure you we are OPEN!”) add a touch of humanity, being just the sort of thing you would expect Dante to throw onto the building at his wits’ end. With a budget of a quarter million dollars, it’s amazing this film was completed at all. The reason the shutters are “stuck”, for instance and require the signs, is that Smith was required to do all of the filming at night, while the store was closed.

The film is split into 8 chapters, each with a separating subtitle. They exist mainly to prevent the need for real transitions. As you might expect with the budget and level of experience of the crew, the vast majority of scenes consist of the crew standing in one place and exchanging dialogues, which works great for a comedy of this nature and would work terribly for almost any other sort of film. Despite struggling with these limitations, Smith was able to make use of them, such as capitalizing on shadows on the outside of the building that you never would have accomplished in color.

Each actor was well-selected for their role. Marilyn Ghiglotti gave the perfect impression of the fiery woman ruled by her passions, while Jeff Anderson showed you that he had no respect for any other form of life. Despite the actors’ inexperience, their largely “read your lines” performance matched the script well. I already mentioned Kevin Smith and Jason Mewes’ somewhat reserved performance, while the scorned Veronica, played by Lisa Spoonauer is absolutely great. It might be of note here that Jeff Anderson and Lisa Spoonauer, who met on the set of Clerks., eventually got married, though that marriage was short-lived. Brian O’Halloran, if not a great actor here, also lives up to the role he was given as the main (and most sympathetic) character.

Clerks. lives on as the foundation for the “View Askewniverse”, the collection of comedy flims written and directed by Kevin Smith. While Jay and Silent Bob are the most obvious connection between these films, there are many linking factors, and the never filmed wake scene would have only added to that. Thankfully, the decision not to use the original ending (in which Dante kills himself) led to the universe being expanded, as Clerks 2 would be created years later to wrap up Dante’s story.