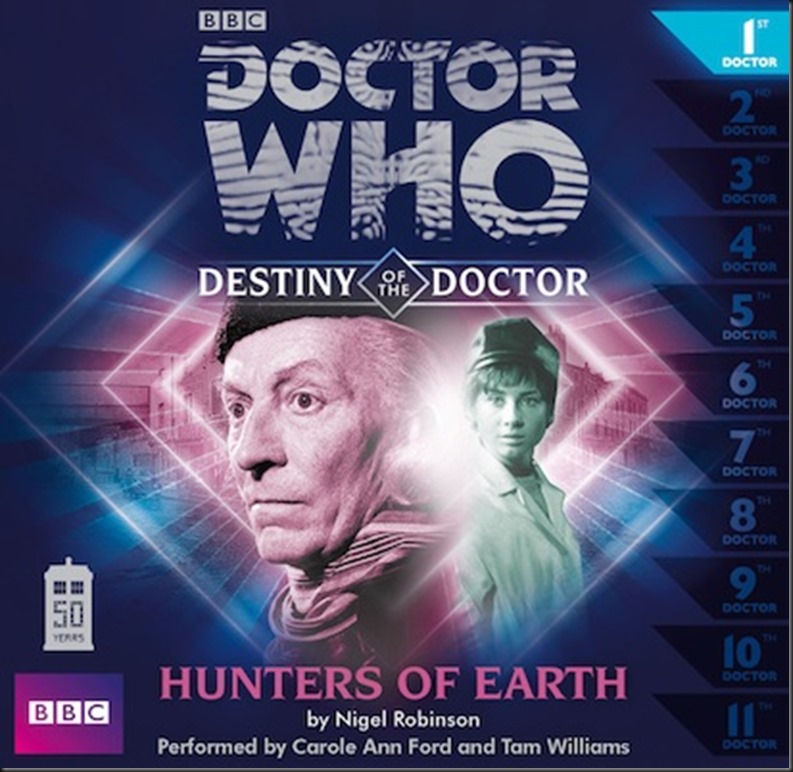 “Hunters of Earth” is the first in the Destiny of the Doctor series released by AudioGo and Big Finish. This series was released to celebrate the 50th anniversary of Doctor Who, and while it is not clear listening to the initial installments if this is all intended to be a single linear story, it is equally clear that there is more to each story than just each individual episode. The first episode takes place before the Doctor has met up with Ian and Barbara – indeed, within the week prior to “An Unearthly Child”. This doesn’t come close to making it the first story featuring the First Doctor, but it does place it in a special position.

“Hunters” is told in the style of the Companion Chronicles, stories narrated by the companion who is traveling with the Doctor (in this case, in the third person). This works very well for stories where the actor who played the Doctor is deceased, though it does preclude the possibility that audio and animated stories have of recasting the actor. That’s not to say that it won’t happen in the future, but for these particular stories, it leads them to present themselves as an audiobook rather than a faux-television drama.

As a mysterious force begins to turn the youth in town to riotting, the Doctor and Susan are outed as aliens and forced to use their expertise in science and telepathy to save their own lives. Carol Anne Ford turns in as remarkable a performance as ever, both in her classic role as Susan “Foreman” and as the narrator. Tam Williams, whose acting career began with an uncredited role as a schoolboy in “Remembrance of the Daleks”, returns to Doctor Who as Susan’s classmate and friend Cedric. As with every Big Finish production, the acting, sound design and direction are top notch, giving the impression that this is far more a passion project than just another way to pay the bills.

As a 70 minute story, this is one of the shortest starring the First Doctor, with only one televised story featuring him in more than a cameo role being shorter. Still, the length works well for the format, easily avoiding the drag inherent in many 1960s stories. With one narrator and one guest star, 70 minutes keeps this story moving quickly, giving the feel of being a single episode within an 11 part serial. A problem that might have been presented as three or four escalating cliffhangers in 1963 is instead presented in short form over a series of events and then solved just as quickly without robbing the story of its tension. Several story elements – a strange message over the radio and a hint at a war against a secret evil – keep listeners on their toes and build tension for the rest of the series.

There are few things I could wish to change in this audio drama, a full cast and a final wrap-up among them. This story has two followups: the forthcoming “Destiny of the Doctor: The Time Machine” and “An Unearthly Child”, the first episode of Doctor Who. As a result, despite solving the problems presented in the episode, this story can never truly stand 100% on its own. Still, neither of these “problems” are enough to present this from being a good story, as evidenced by the fact that fans who are new to William Hartnell’s First Doctor can enjoy this story, months before the release of “The Time Machine”.

“Hunters of Earth” is a good pilot and a great way to built up Destiny of the Doctor and the 50th Anniversary of Doctor Who. The First Doctor is captured perfectly in the script, and it’s only slightly damaged by the fact that you cannot actually hear William Hartnell’s voice. If you’re a fan of the First Doctor era or even remotely interested in getting started on it, there’s little reason not to listen to this story.

One thought on “7 Days of Classic Who: Destiny of the Doctor–Hunters of Earth”