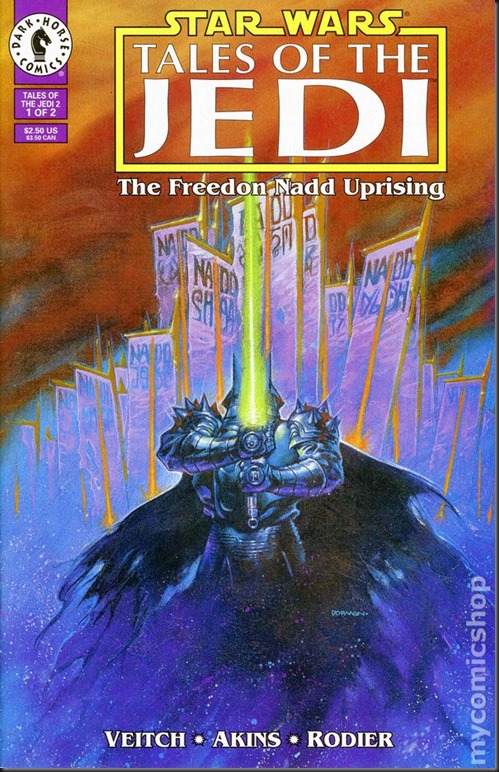 The Freedon Nadd Uprising is the third arc in the Tales of the Jedi series (keeping in mind that the two volumes about the Great Hyperspace War were published later) and it’s where a lot of things change. By the time this was made, Dark Lords of the Sith and The Sith War were in the pipeline, which means Tom Veitch had the opportunity to plan ahead and foreshadow in a way that wasn’t necessarily an option for Ulic Qel-Droma and the Beastriders of Onderon and The Saga of Nomi Sunrider.

The art picks up here as well. This is no longer a one-off story being told in flashback form, although some of the art is still reminiscent of the previous two volumes and Nomi Sunrider’s hair is still really awkward. The colors are vibrant and powerful here, still not what one may be used to from more recent comics, but at least the equal of other comics coming out at the time, unlike earlier Dark Horse releases which are clearly from a lower budget tier of comic creators.

The Freedon Nadd Uprising is essentially a sequel to Ulic Qel-Droma and the Beastriders of Onderon. Reading the Omnibus actually helped here, as it forced a sense of time on the story that I didn’t feel the first time I read it. When I originally read Tales of the Jedi in my youth, my impression was that it seemed really strange to break up the steady action from Beastriders of Onderon and Freedon Nadd Uprising with The Saga of Nomi Sunrider. When you take into account the timeline showing that Saga actually started and finished in between the events of the two stories on Onderon, things make a lot more sense.  I’m not sure if the comics themselves ever made this clear, however; I could find little to indicate this, although if there was narration in the first issue it was removed for the collected version.

Queen Amanoa’s death was not the end of the Naddist revolt; it seems that either Onderon joining the Republic was a trap, or the rulers of Iziz just weren’t quite sure about what it was that the Republic stood for. After months of conflict, more Jedi Knights and Masters have begun to arrive to join the Jedi on-world and the Beastriders in the civil war. This The first issue sees such things as a black armored Dark Jedi rising from a tunneling machine in the middle of the city to kill people and  – does there need to be anything else?

The creators spared no effort for this special. Combining the elements of the previous stories, Ulc’s brute force and leadership, Nomi’s battle meditation, and Arca’s tendency to get mixed up with powerful Dark Side users are all made useful as we see Tales of the Jedi’s version of Emperor Palpatine (so soon after faux-Vader?) overcome by a combination of numbers, and by the spirit of Freedon Nadd abandoning him for someone younger and with more potential. I mentioned earlier that further stories were already planned by this point; the ending of Uprising hinges on this, as Nadd decides to take his legacy somewhere where a dying old man isn’t his only tool.

The Freedon Nadd Uprising is a great comic. It’s not particularly deep or insightful  – if anything, that’s saved for the next story  – but it is suspenseful and exciting. It would be impossible for me to read this on a monthly basis and not look forward to the next issue each month to find out what Ommin and Nadd’s sinister plans were.

The start of the second Tales of the Jedi Omnibus, The Freedon Nadd Uprising is a fair place to start a read-through of Tales of the Jedi. Some of the younger Jedi’s characterization might be lost, but none that’s very essential to what’s to come. The story is tighter than either of the earlier stories, and so is the art. If you’re uncertain about Tales of the Jedi, this is a great entry to pick up as you decide if you want to read Dark Lords of the Sith.