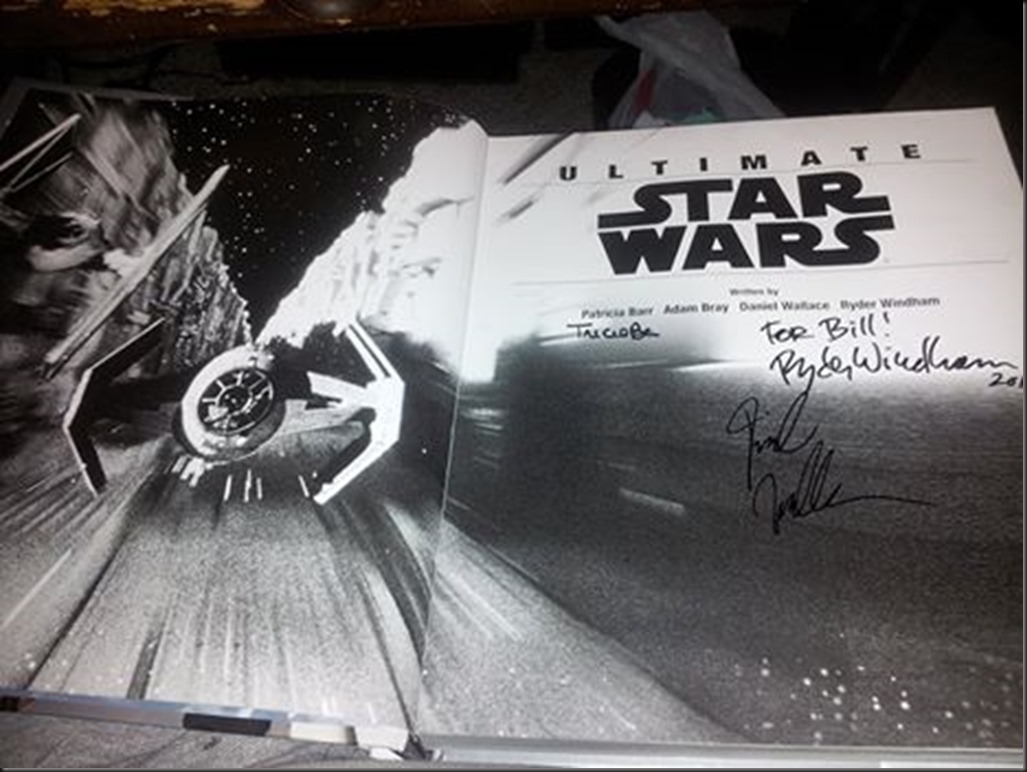 This is the first of a series of articles stemming from Star Wars Celebration Anaheim. It’s taken me a week to get caught back up to the real world, but you won’t have to wait for me to read the pre-releases I picked up at Celebration (that were released today). So let’s kick off with the big one: Ultimate Star Wars, by Patricia Barr, Adam Bray, Daniel Wallace and Ryder Windham.

Ultimate Star Wars is sold as the current canon of the new Star Wars. Everything Legends is trimmed out, with the remaining information split between The Phantom Menace, Attack of the Clones, The Clone Wars, Revenge of the Sith, Rebels, A New Hope, The Empire Strikes Back, and Return of the Jedi – and thankfully, a few more.

I normally don’t buy the DK reference guides, for a number of reasons. The format is a bit haphazard for me (I much prefer the format of the Complete Star Wars Encyclopedia) and I find the tone of the Essential Guide series more to my liking. Generally, I find the LucasBooks releases to be generally more complete while the DK books seem to be more accessible to casual fans. This alone would not prevent me from buying them, but the fact that they tend to be fairly large and expensive and the fact that I have a limited budget often causes me to lean toward new fiction releases (or Essential Guides with new ficiontal elements). In this case, though, I felt compelled to buy the same book that Leland Chee was using as a reference when answering questions at a panel during an era when there is not yet sufficient material to be other than a casual fan.

Let’s start with the information, then. I mentioned that there are more sources than simply the six theatrical episodes and the TV shows, and that was mostly true. Considering that there were two published novels in the new canon as of January and that there are four new, that doesn’t leave a lot of room for the information contained in them, or in any of the 2014 comic story arcs. Couple that with the fact that books like this take a lot of work and need the manuscript to be submitted well in advance of the publication date, and one gets the impression that the details of Kanan’s origin included from A New Dawn probably came from an email from Dave Filoni rather than from actually having the chance to read the novel. It’s notable that a number of previously established Legends characters that were referenced in James Luceno’s 2014 novel Tarkin (such as Armande Isard, a character whose details include far-ranging implications for fans of many Legends characters) are not referenced here.

When it comes to television, information is a bit more inclusive. Not only does The Clone Wars share equal spotlight with each of the theatrical episodes, but I found information in this book that did not seem to appear in any of the episodes currently available on DVD, meaning that the information included in the Clone Wars Legacy storyboards that were never completely animated (which we have been told was to be considered canon, unlike deleted Return of the Jedi scenes) made their way into this book. Rebels, with only one season rather than six, does not have the same amount of space, but there is a fair amount of material dedicated to the crew of the Ghost. It is worth noting that the events of the Season 1 finale are not included, meaning that this reference book is safe for those looking to avoid major spoilers to read.

Regarding the theatrical episodes – particularly the Original Trilogy – there is a whole other question. In fact, this one was brought up at the panel regarding the new direction of Star Wars. There are many characters that were never named in the Original Trilogy, characters that were named after their costumes in ways that a modern audience would identify as a racial slur (Walrus Man, Hammerhead, and others). Because these names did not appear in canon material, there was the question as to whether they were still canon. Uitimate Star Wars confirms that with a few exceptions (Tycho Celchu was named in an X-Wing novel rather than in reference material) most of these names have remained intact. Some information, however – such as highly disputed Death Star and Super Star Destroyer dimensions – has been expunged from the record, waiting for new information to fill the hole.

Despite this wealth of information, this book is clearly intended to be a brief introduction to these facts, rather than a new encyclopedia. Entire story arcs of The Clone Wars are often reduced to a blip on a timeline, whereas smaller details are sometimes cut altogether. This makes room for more focused guides down the line.

Visually, the book is all it can be. Like other DK reference books I’ve experienced, it forgoes some of the background art that readers of the later-generation Essential Guides, but includes no less artwork as a result. Every entry – whether a two-page spread or a corner paragraph – has a visual if a canon one exists. Of course, larger entries have more visuals (Yoda’s article, for instance, features eight images from his scattered appearances), making this book as jam-packed with things to look at as it is things to read. Each section starts with a visual timeline featuring major events relevant to the topic.

Where I feel the book starts to fail is in the “Event” entries. Rather than having their own sections such as Characters and Creatures, Locations, Technology, and Vehciles, events are scattered among the book. In some cases, these are tied in some way to the nearby topics (for instance, Chancellor Valorum’s vote of No Confidence is located in between entries of characters that feature heavily into The Phantom Menace) whereas in some situations they just seem to be entered haphazardly (such as Vader’s revelation of Luke’s paternity being well apart from either Skywalker’s entry, in between articles about Rebels and the introduction of Lando Calrissian). As somebody who is familiar with all of these events, I mainly just treated them the same way I would an ad on Hulu: took a sip of my drink and skipped to the next entry of what I was actually reading.

Ultimate Star Wars is a great coffee table book. It’s not as fun to read or as chock-full of new information as the Essential Guide series, but equally, it manages to avoid obscuring between reference and new stories. My friends and I spent our time in lines pouring over this book to find out who was still canon, what we do and don’t know about them, and while there was a cry of disappointment at the lack of a “Celchu, Tycho” entry, the blame for that does not lie at the hands of those who wrote the book (though I tend to hope at least one of the authors asked the story group about that one). I tend to wish that Ultimate Star Wars was a little more, well, ultimate, even if that added an extra $20 to its price, but it’s a good book for $40 and one that I don’t regret picking up.