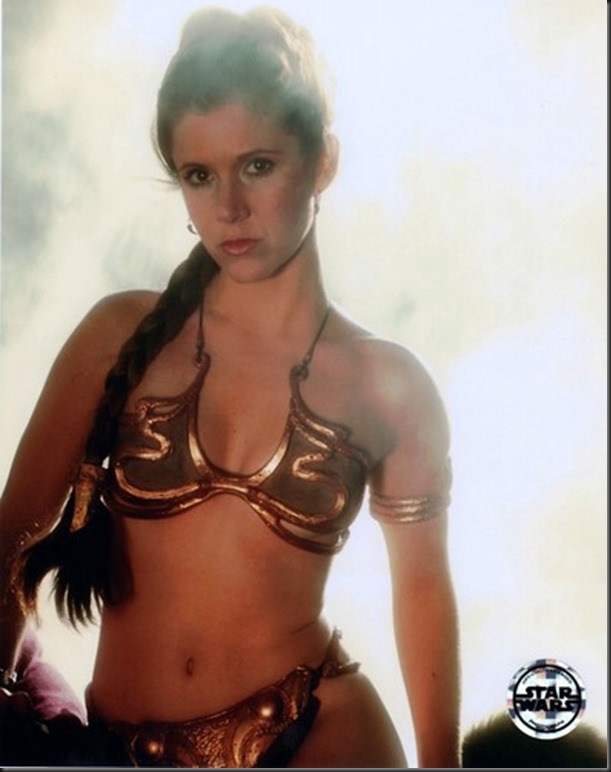 In this article’s sister on Fantasy & SciFi Lovin Reviews, I talked a lot about the effects of a widespread national acceptance of a costume that consists largely of scraps of metal and cloth nonchalantly deflecting public decency laws and the emotional benefits for the wearer of the costume. This is an “after” view, of course; it is an analysis that could not be made before the costume became a convention staple. It has nothing to do with what came before, or what the costume meant in its original context.

Before I look at Revenge of the Jedi, I do want to address the title of this article. When I say that Slave Leia is sexy, I am not talking about eroticisim. While I personally struggle to find anything so uncomfortable for the wearer that it is described as “what models wear in the seventh circle of hell” to be erotic, I can understand the appeal of an attractive young adult revealing trheir flesh in a unique costume, just as I can understand that some couples may enjoy cosyplaying a crime lord chaining up a slave who then proceeds to overpower and choke him. There can be a time and a place for either – it’s just not this article.

This does bring the early truth of the costume – and much of its criticism – into light, however. At its core, the Slave Leia is a costume that a powerful man used to objectify a young woman. If you stop at this scene, I would have no defense to muster. It is a straight-forward villainous act intended to reduce a strong woman into a pin-up poster, and while I will not damn anyone simply for wanting said poster, its existence in context would be indefensible.

But the story doesn’t end there. I said that Leia was a strong woman, and it takes more than kissing Sleeping Beauty and being put in a skimpy outfit to change that. Leia takes control of the situation, and ends the objectification on her terms, at a time of her choosing. She could have given in. She could have waited for her brother or her boyfriend to save her. She didn’t; she stayed on target because she could handle it on her own.

This completely changes the dynamic of this trope. Slave Leia is not a symbol for oppression. She is a symbol for taking that oppression and beating it. Taken as a real world concept, this is immensely powerful. Almost – if not every – woman will face the situation symbolized by Jabba. Many men will as well.if possibly a much smaller percentage. Many people will be catcalled, sexually harrasssed, touched inappropriately, or otherwise placed in the metaphorical slave costume. But that is an obstacle, not the end. The moral of Slave Leia is to get past this; not be subjugated, and to move past it: to take what is intended to be a demoralizing offense and make it empowering instead.

This is what makes Slave Leia so incredibly sexy to me. Jabba could have put her in a balaclava for all I care, it’s the power inherent in the symbol and turning Jabba’s vile acts into a weapon against him that makes Jabba’s death one of the defining moments of Leia’s character for me (the other is “somebody’s got to save our skins”). Now while I’m not recommending that everybody who is sexually objectified strangle the aggressor, just like the villains have a lot of weapons, so does the defender. A lawsuit or even a few words can be an effective weapon against this behavior, so long as it’s identified and the opportunity taken. That’s not to say that empowerment will always win – even Leia could not have saved Han without any help – but it can go a long way.

This is why I can’t agree when I hear complaints about a Slave Leia costume. Fat, skinny, disabled, male, female – everybody has the right to be empowered. Children especially can draw from this costume, though I wouldn’t recommend as much exposed skin to make the point.

The Slave Leia suit is more than a way to show skin for the sake of the audience or even for the wearer’s own confidence, although it can be worn with either purpose and I talk about that here. It tells a story, and that is a story of empowerment and independence. It is a story of woman standing up to man, and more importantly of the oppressed winning out over the oppressor. That, to me, is the sexiest thing a character can be.