Going through high school with a copy of The Eminem Show in one hand and a notebook full of rhymes in the other, 8-Mile has a special place in my heart. Is it as good as rose-colored glasses make it out to be? 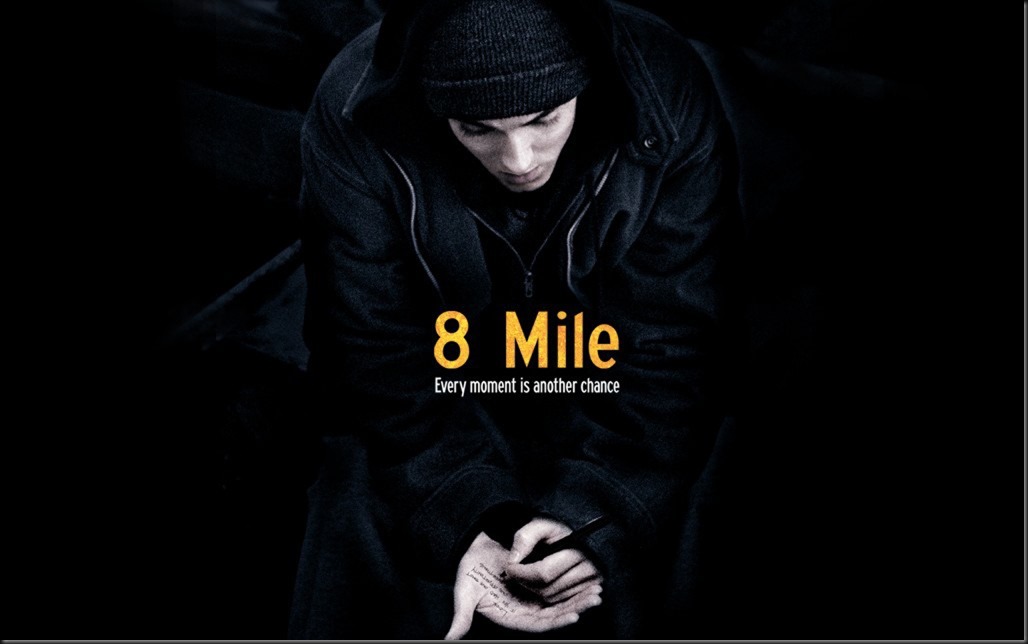 8 Mile, based loosely off of the life of rap star Eminem, tells the story of Jimmy “B Rabbit” Smith, a white man trying to make it in a world where he’s not accepted, in a field with a nearly 100% burnout rate. In the midst of this, he falls into trouble with the local gang, “Tha Free World”, while he does his best to live a normal life.

When this movie came out, I was in love with it. Looking back, I can see it as a guilty pleasure. Everything is good about it was probably not written by the screenwriter, but by the many rappers who were called on to support star Mathers’ big project. But when you had as much fun as I did just watching the features on the DVD, you’re going to be drawn to the movie.

The primary arc follows Jimmy’s struggle as a rapper making the battle circuit of Detroit. For those unfamiliar, a rap battle is similar to a poetry jam, except that it’s competitive. In the case of 8 Mile specifically, it means 45 seconds of freestyle rapping while you prove that you’re a better rapper than your opponent. The film starts with Smith, played by Marshal Mathers, facing a humiliating defeat at the ends of a rapper who happens to be a member of a gang that doesn’t take kindly to Smith’s presence on stage.

From there, Jimmy builds up his confidence dealing with friends and coworkers as he makes sacrifices in the name of his music career, knowing that this is an all or nothing gamble. In “heat of the moment” situations, he starts and ends a relationship, all of which lead up to the climax, a three-round rap tournament where B Rabbit can either win the hearts of the crowd, or expect to be beat up outside his mother’s place again.

Let me start with why I love this film so much. This film came out at the height of Eminem’s popularity. In fact, the soundtrack is more popular than the film itself, and can honestly be said to tell a more compelling story. “Lose Yourself” has become Eminem’s greatest hit that’s not about selling his name to the pop charts. While none of the songs on the soundtrack are featured uncut in the film, the film does feature several minutes of additional lyrics, many of them performed by Eminem and the rest I suspect to be written by the star. On top of this, Mathers was essentially playing his own self – or at the least, his stage persona – in an inspirational film, something that he did extremely well.

The rest of the film is a bit more hit or miss. Many of the characters have bit roles, and few of the others have personalities. While the film follows a good structure, the script doesn’t have much in the way of attention-capturing lines outside of the rap battles themselves. They exist for the film and the film exists for them. While I can’t pinpoint any of the acting as terrible, I also find it hard to consider much of it to be acting. Most characters with lines are acting as archetypes, and thrust the attention onto Mathers if at any point they find themselves accidentally holding the ball.

Hip-hop culture is essential to this movie, which doesn’t try to explain it. While 8 Mile goes to pains to show you what it’s like to be a skinny white man trying to compete in a predominantly black field, it expects its viewers to understand the context on their own, or at least be able to pick it up without explanation. Then again, the film starts with a rap battle and then continues on to Jimmy returning to his mother’s run down home, where she is having sex with her boyfriend, before showing us Jimmy’s day job, so maybe it explain more without trying to than I might give it credit for.

If you are experiencing a similar point of view to the characters, though, there’s a wealth of entertainment value to be found here. Produced, starring and featuring some of the most influential names in hip-hop at the time, 8 Mile had its finger on the pulse of great hip-hop of 1995, the year it was set in. 2Pac, the Notorious B.I.G. and the Wu-Tang Clan are only a handful of the acts you can here making up the score of this film, and it’s an utter delight for a fan.

As a hip-hop film, 8 Mile undoubtedly works, and as inspirational film it’s not all that bad either. Its main draw is definitely the music, as somebody who can’t stand rap music is going to struggle to enjoy this film no matter how much they identify with Jimmy’s plight, just as somebody who doesn’t can look past it if they’re having a good time listening. Ultimately, that’s what my recommendation hinges on. A casual rap fan is just as likely to enjoy this as a hip-hop head, though certain individuals just aren’t made out for Eminem, even at the top of his game. I just call it, I don’t try to understand it.